A few days ago I saved a C64 C. The owner wanted to throw it out because:


"This is just an old keyboard, it doesn't even fit the PC"

The case has serious scratch marks and looks like soldering iron or something similar melted parts of it. It has replacement screws that are too long and went deeper than they should and drilled new holes into the plastic...

The C64 was surprisingly in a good condition inside. Almost no dust, motherboard was fairly clean, keys are stiff. However, keyboard holder metal parts were missing and the fuse was blown out.

Replacing the fuse was the easiest part, then I gave it a try, plugged the cables in, and switched the C64 on.

Well, I tried to switch it on. The power switch was stucked in the OFF position, I had to use serious force to switch it ON.

And... after a few breathless seconds and the init black screen...

Everything works fine, except the stiff power switch. I have to do something with it. Why not replacing it to a new one? Yeah, that's a brilliant idea.

The hunt for a new switch was easy, I should consider myself lucky as there was an ad on AmiBay, a guy sold some spare switches for a few bucks. Let's do some serious soldering business again! 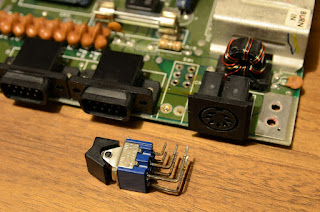 Look at those tiny legs, they are easy to heat up and sniff the tin off with a desoldering pump. But the 2 stronger stuff that are not really visible because I was lame and didn't make a better photo... I recommend to use a better soldering iron with 75-80W power at least, it can heat up the tin much faster.

These are connected to the "ground" and are deeper mounted into the motherboard with more tin.

I was afraid I would heat the panel up too much, so I used brute force - and a screwdriver - to remove the switch: heat it up as much as possible AND insert a screwdriver under the switch at the same time.

It worked well and did not cause any damage on the motherboard.

So, next step was to insert the new switch and burn it in. I've chose a very thin tin (hehe, thin tin, hehe...) and a small amount was enough to glue the switch into its place. 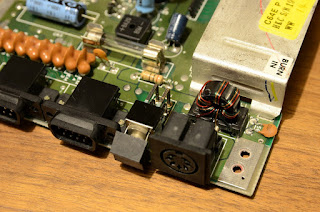 It was easy. Really. Even an amateur like me can do it without risking to break anything. 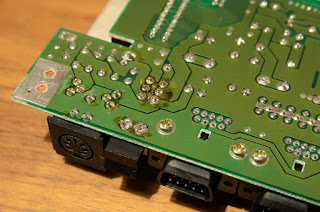 It's not the most beautifully soldered switch ever, but good enough. Those brown burn-a-like spots were already there, I suppose this C64 got some serious electric shock, maybe from a damaged power supply and that burned the panel a bit. This would explain the broken fuse as well.

Now I need to find a solution to the plastic case...

Today's music: Bloodhound gang - The roof is on fire