The first candidate for destroying completely cleaning and making it as new was a Commodore Datassette (C2N). It came with a C64 version C but it is compatible with C64/C128/VIC-20/PET.

Disassembling is easy, 4 screws should be unscrewed on the bottom of the device, then the mechanics and electronic part can be removed together.

As I mentioned it in my previous post I forgot to take photos of this procedure, I was too excited to dismount and clean it.

After I removed the electronic parts, the device spit a big amount of dust out from itself... well, this must have been in the attic for 10+ years... Anyway, dust can be removed easily, use some compressed air or a soft brush. Outside, of course. Otherwise your other half won't be happy.

(don't forget to keep the screws in a safe place, where you can find it easily later)


Next step was to think about the plastic parts. They were not only yellow, but YELLOW!!!!1!!1
- the parts need a lot of H2O2 (aka. hydrogen-peroxide)
- and a lot of UV light
- something that prevents the H2O2 to dry out on the sun

I cleaned the plastic with warm soapy water and let it dry completely. This makes sense as the dirt of thousands of years might block the H2O2 and it's more effective if I use it on clean plastic.

Take a cardboard box, cover it with cellophane. Add a lot of cream to the parts, smooth it with a sponge. Then cover the parts with more cellophane. Bring the parts to the balcony and put them on the top of the cardboard box. Similar to this: 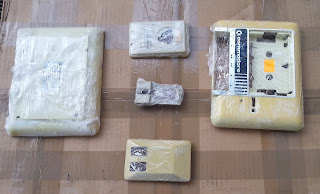 Note #1: yellowed parts are barely visible but visible enough to realize they were quite YELLOW.
Note #2: yes, that's an Amiga mouse, later I'll write a dedicated article about it.

Let them have a sunbath for 2 days. I was lucky because those days were sunny enough to achieve a great result.

In the meantime I checked the electronics, cleaned the tape head with nail polish remover, checked the rubber bands - replaced the counter rubber because it was loose.


This picture was taken right after removing the cellophane and cleaning the parts with hot water after 2 days on the balcony: 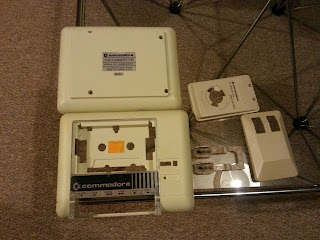 Let it dry a bit. Then use some nail polish remover - poured into a paper towel - to clean the marks and give it a shiny bright surface. Be careful with the polish remover! It can remove the writing, use it on the white parts only!

Last step was to assemble it together and test it with inserting a cassette and loading a game. Everything went well, the C2N works and loads the games as it should. Basically, it's a reborn datassette as good as new. 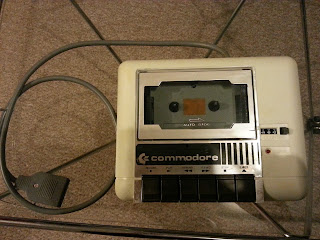 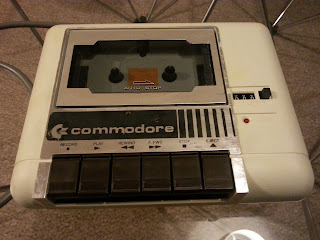 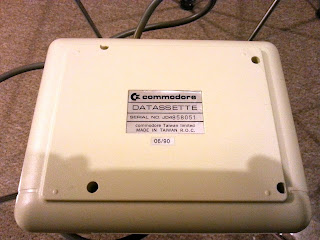 Conclusion:
- need a lot of H2O2 cream, even more than you think it's enough
- 12% cream H2O2 is perfect for the job (see previous post)
- cover everything with the cream
- 2 days with 3-4 hours of  not-so-direct sunlight can make miracle
- change the position of the parts from time-to-time, whitening will be more consistent
- nail polish remover is a strong stuff, don't inhale it
- nail polish remover is a strong stuff, use it only on the plastic
- really, it will remove the writings if you aren't careful enough

Posted by StrayBoom at 5:52 PM