There were some pictures about an Amiga mouse in the previous post(s), now it's time to share the complete story.

I received the mouse with an Amiga 500, the seller mentioned yellowed parts and a partly-broken mouse. Well, it looked like I'm going to have some fun with using H2O2 again and practice with soldering some electronics. You can guess, I don't have photos about the original condition of the mouse...

Anyway, I connected the A500 to the tv and *boom* the magic boot screen appeared immediately and the Amiga loaded Workbench from a floppy disk in a minute. That was quite painless so far.

I had a testrun with the mouse to check its condition, well, the buttons were unstable and their clicking sounded broken. As an additional defect the left mouse button didn't work.

I was thinking, would an old but still working PC mouse be a good replacement? Let's ask the internet.
This was the best answer to my question, thanks to a user called Aidan on a random forum:

Okay, then I need new knobs, and after a quick search I found them at AmigaKit. 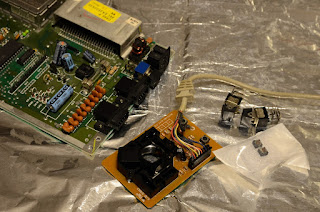 I used a basic 40W Weller and a desoldering pump to remove the broken buttons. As this part contains relatively small amount of tin the part were removed quickly and clean. The next picture shows and empty slot and the already inserted new button: 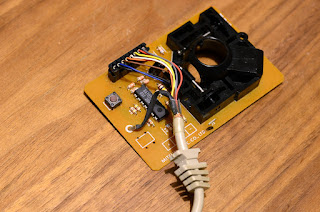 This one shows the replaced buttons together with the old stuff: 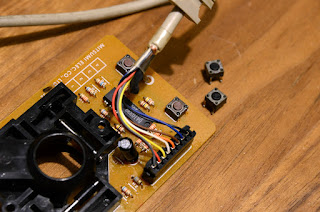 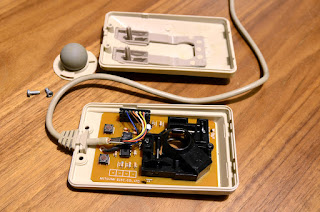 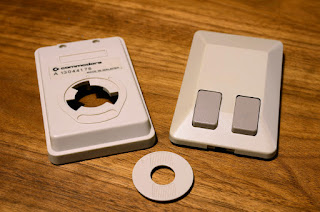 I had to cheat a bit with the case because the new buttons are higher and stiffer than the originals and the mouse case became too tight. Used a small plastic piece, cut from the external part of a cable, glued them to the bottom part. Looks like somebody is mad, right? :) 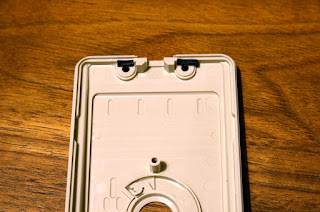 This was just enough to lift the upper part a bit and the buttons can *click*.

There is a small crack on the left button but overall the mouse is nice, clean, white and everything functions as it should. This is the last photo, taken right after reassembly: 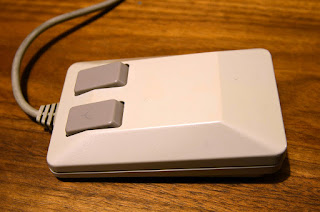 Posted by StrayBoom at 9:36 PM