Had some time to make another comparison! This time I compared a 8580 (2288) to the very new, only prototype shaped SwinSID Ultimate.
Don't let it fool you, it doesn't look nice yet but who cares if the sound is great, right? I don't. The audio quality, replay and features are more important than the look. 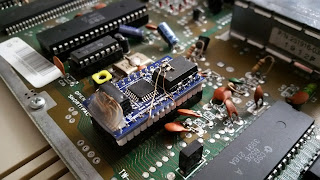 It's sitting in a C64 E (469 REV B) board and is happy there. I'm thinking of keeping it there forever, first because it fits very tight and is tricky to insert/remove without hurting the legs. And then because I like the sound much so why should I remove it? 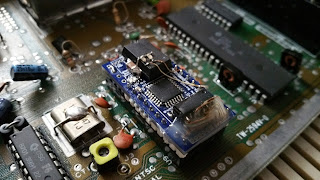 I don't really want to write about technical details and stuff, you can read more about it at ilesj.
Do it, read his article because it's great, however, there are no audio examples so I take it as a challenge to be the first to record, compare and release some audio material with the SwinSID U.

I've chose some great demoscene tracks again - and only one game music -, tried to select some tricky tunes with good sound design and musicality to see how the SwinSID U performs in kinda extreme conditions.

Let's start with one of my favorite music that starts with one of the coolest car engine sound effect:

How cool is that sound, right? Necropolo bends the SID like it was his guitar, pushing the limits and making the SID bleed. Now here comes the SwinSID U version:

Output volume is definitely lower but I must say, it's impressive how the SwinSID U reproduces the original sound. It's not 100% there but almost reaches it. The 8580 is a bit more beefy but basically that's it, the 2 are identicaly - and don't forget the fact that the SwinSID U is still an emulation

Let's jump to the next track:

Not much to say, it's Lazy Jones. However, due to the special playroutine the previous version of the SwinSID had issues with it until CodeKiller's "lazyfix", and the Ultimate just says, "naah, I can take it":

Let me interrupt the show with more fancy visualization of audio waveforms. I know, I know, this is my fetish.

The following screenshot is the side-by-side comparison of Cadmium on 8580 (upper) and SwinSID U (lower).

8580 looks a bit more sharp and spikey, SwinSID U is softer - now you can see it, not only hear. However, the waveform reproductions is awesome, it's as close as it can be. Just think about it, the SID is a kinda analog synthesizer and the SwinSID U is a digital replica. Impressive.

Again, 8580 is a bit louder and sharper. The visual waveform differences are barely audible.

Awesome track, great sound design. And btw, great demo, you should watch it.

So far the SwinSID U did the job well, but I want digitized sounds. Ready?

Let's play a game. Find the 10 differences between the original and this one. Send the result via email to me.

And the last track for today is another digitune:

This is a remake of Danko's popular demo-loader music, mixed and remixed by Swallow. Hardsync, digi sounds.

Aaand, SwinSID U. A bit different, carrier signal is audible but it's not bad at all. It's not beeping all the time, only when the samples kick in. Still great, still sounds good.

Conclusion:
SwinSID U is a great SID replacement. It's not 100% true to the original sound but I don't think it's even possible. There are many different methods to play - plus digi - music on the C64 that faithful emulation is technically nearly impossible. SwinSID U is softer than the original SID, maybe a bit of waveshaping could help but not really necessary. The audio quality is top notch and it has the mojo.
Well done Hermit and CodeKiller!

Posted by StrayBoom at 4:40 PM