It's so wonderful how many options we have to ruin those good old computers. For example, expansion cards, extra RAM, extra CPU, etc. This time I decided to ruin Blu with an additional SID.

It's not really a new method to expand the sound capabilities of a C64 with another SID. DualSID, so called. Use 2 similar SIDs, set them to different memory address and that's it. If the software, for example a music editor supports this, you will have 6 independent SID channels which is great. It means more sounds, more opportunity to create great music on the '64.

The "Pseudio-Stereo SID" by Tynemouth Software is a bit different. The idea was to create a Stereo C64 using 2 SIDs, where the SIDs are set to the same memory address AND they play the same audio output AND they can be either 6581 or 8580 SIDs. 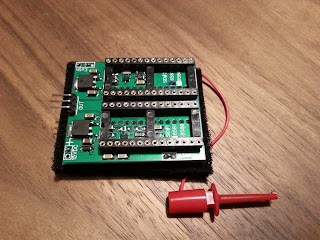 This way the C64 has still 3 channels but they are doubled and have separated audio outputs as well
I ordered my PCB for a C64C (SID 8580) with additional slot for a 6581.

You know me, I like to compare the SID revisions to each other and this would be a great way to listen to some music and record it simultaneously - or just simply compare the audio differences.

So, it has arrived. Nice and clean PCB, well organized and made. I wanted to use RCA connectors as they are easy to connect to any interface or mixer. I decide to drill holes on the left side of the case as there is enough room for them. 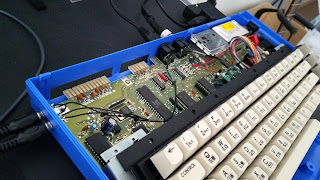 One RCA connector for 8580 (right side) and another for 6581 (left side). Maybe they are a bit too close to each other but well, it works fine and is not _that_ ugly. 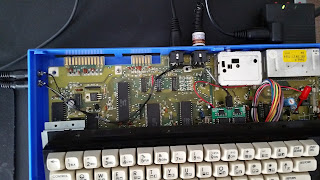 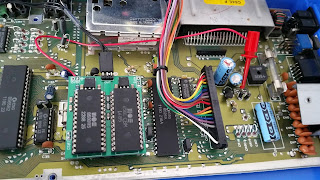 Blu is close to perfection. I still need two things to solve:

Posted by StrayBoom at 4:38 PM