As promised, here comes a few more "SIDbreaker" track to see and hear the difference between: 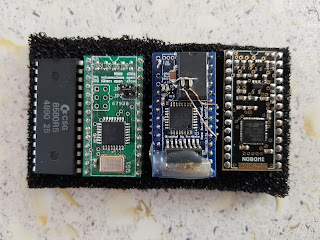 
I will add my comment after each music-group, spoiler alert: Darth Vader is Luke's father.

8580: Perfect playback. Of course it is.
Nano: Broken. Looks like this Nano doesn't have Codekiller's "Lazy Fix" patch.
Ultimate: Sounds good, nice playback, maybe a bit darker than on the 8580.
ArmSID: Sounds good and bright, ArmSID successfully jumps through the first blockade.

8580: Perfect playback.
Nano: Broken. Wow, it's soo much broken the track is unrecognizable.
Ultimate: Waveforms are nice, sounds nice, but misses a few notes here and there.
ArmSID: Almost flawless. The flange effect sounds a bit strange where the instruments overlap.

8580: Man, I'm in love with this track, perfect music for a great demo from X 2016 party. My only question is, Jammer, mate. How the hell did you manage to overdrive the 8580 this much? It clips!
Nano: Broken. Strange blips and blops, filter is way off, and even more strange cracks appear here and there.
Ultimate: Good playback, the filter is definitely off a bit and it sounds darker. But it still sounds good, especially with this track. I like the stronger wobbling at 0:50.
ArmSID: Good playback, waveform looks slightly compressed/clipped. It even cracks a bit at 0:50 and at the end part. Not bad tho, I like its crunchiness when it doesn't cracks.

8580: Yay Mahoney digi, yay Kraftwerk with a twist. 8580's output is quieter now, but it's nice and the samples are well-defined.
Nano: Surprisingly good but it's noisy and inaccurate. It's crunchy, but it's lovely in a way.
Ultimate: Dynamic as hell but it missed the volume fade-in at the start. Clean and well-defined digi samples.
ArmSID: Quiet, crunchy and noisy a bit but it replicates the volume fade-in nicely. Somehow it's not that clean and defined as the 8580 and Ultimate.

8580: Digi samples mixed with SID sounds, a bit lo-fi-ish, but dynamic and clean.
Nano: Loud carrier noise, but the sample playback is good. SID instrument emulation is a bit pure here.
Ultimate: Different but still loud carrier noise. Sounds a bit like an Amiga with filter enabled. In this case I'd say it's even makes the music more audible.
ArmSID: Carrier noise is still there but in unexpected places. Nice sample playback, has it's charm with the random noises.

Pseudo-SIDs are getting better and better. SwinSID appeared first, it's not actually a surprise that the Nano is not perfect. Ultimate is a totally different construction from different engineers, it just kept the SwinSID name. I didn't even know that ArmSID exists until I've seen an advertisement about it at Revision demoparty.

Despite their imperfection, they are really great replacements of the 6581 and 8580. One time we will run out of real SIDs. Then we will need something to put into the mainboard and these chips will be there. Hopefully, engineers and programmers can develop them further, the FPGASID is very promising and would love to give it a try.

Our taste can be very different and can argue about various emulations for hours, days, weeks, etc. I recommend to check out the available SID replacement, listen to the example audio and pick the one you like the most to replace your defective SID(s). There's no bad choice, and the market will be even more crowded soon and you'll have more to choose from.


Thank you for reading and listening.

Posted by StrayBoom at 8:36 PM