Lemon. aka. "Winners don't use AGA"

I've met with the Amiga somewhere around 1993 where one of the guys in the youth hostel showed us some great demoscene productions on his A500. Since that point I had the good ol' C64 and we used 386 PC's at school. The difference between the PC and Amiga was remarkable. The graphics, the audio, the games... everything was just... simply wow. 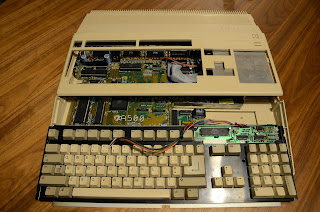 The machine is a bit yellowed but who cares, I'm gonna retr0bright the sh*t out of it. The fl0ppy disk is broken, it doesn't load anything just gives a "corrupted floppy disk" error message. Whatever, I might gonna invest into a Gotek drive later. I have an Amiga 500! :)

However, the most important part is the 512kbyte memory expansion. These expansions usually as old as the Amiga itself and the mounted battery starts to leak. Badly. 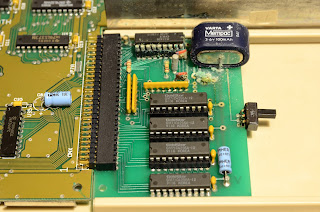 After some research I found that this is normal, as these batteries weren't made for eternity, obviously. If you are lucky then the acid doesn't eat the circuit - and I was lucky.

The leak wasn't _that_ bad, it was just _bad_. Removed the expansion, it was stuck a bit bit I used the force (pun not intended). And desoldered the leaking battery and removed the infected chip as well. 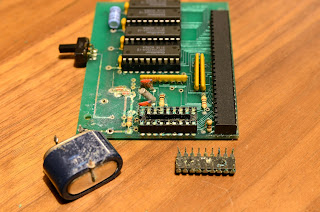 The chip looks like a dead bug but actually it's not dead, just resting. The battery however, is dead.

Side-note: if you have a closer look on the photos you should realize 3 of the 4 similar chips are in a mount but the 4th is not. It's soldered into the panel without a mount. Why?

Anyway, the next step was to clean the panel and the infected areas. What would you use to remove acid?

LEMON! Really. This has something to do with chemistry, pH and acid and alkali stuff, whatever. I don't know about the exact background of it but I gave it a try and used some real lemon juice to clean the panel.

Cut a lemon to half, squeeze the juice out of it into a bowl, stick an earbud into it then pour a lot of lemon drips into the panel, cover all the acid-areas with the juice. You can hear a bit of sizzling noise, this means the lemon fights with the acid. And the lemon will win, you can be sure.

Leave them fight for an hour, then clean the panel with water, let it dry out for some days and voila. 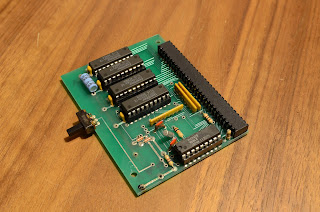 Actually, I was double-lucky this time because the acid didn't melt deeper into the panel and cleaning was simple, there was not necessary to do some electronic soldering work.

Coming up next: cleaning a slightly yellowed A500 and fix the broken floppy drive.

Posted by StrayBoom at 6:18 PM